"Isaac failed his newborn hearing test when he was just 5 days old. We were shocked but put it down to the fact that he was born quickly and had ‘gunk’ his ears. It was a worrying time but we had great hopes that it was all a mistake and that everything would work out OK.

"So, when they told us that Isaac was deaf, it came as a massive shock to us all. On top of that, tests showed that the cause of Isaac’s deafness was Cytomegalovirus (CMV), which is a virus that affected Isaac in the womb. Because of CMV, Isaac’s deafness quickly deteriorated from mild to profound in a matter of months.

"We were fortunate enough to have a lovely Teacher of the Deaf who talked to us about The Elizabeth Foundation. Isaac joined Julie in the Baby group and he absolutely loved it. It was quite clear to see that this is where we belonged and we haven’t looked back since! Some of the worry that we felt melted away, seeing how well Isaac responded to the techniques that they employ. He then moved into Nicky’s Toddler group where he continued to thrive.

"As time progressed, Rhian, one of the Speech and Language Therapists, talked to us about the possibility of Isaac having a speech disorder. We knew that Isaac wasn’t where he should be in terms of speech, but we thought that it was because of the Cochlear Implant operation. Rhian identified a specific speech therapy to try with Isaac and it unlocked something in his brain. He’s now talking in sentences and can be understood most of the time!

"Isaac currently attends the Preschool which he absolutely loves and always cheers when it’s a “Rachel and Emma” day. He’s made some really strong bonds with his classmates. It is brilliant that he sees other children with hearing technology, so that he understands that other children are just like him.

"Isaac has planted his roots here at The Elizabeth Foundation. I am positive that with the right care and nurture he will grow up to meet his full potential, because that is, after all the thing that we worry about the most.

"Isaac embarks on another journey soon when he goes to school, I’m sure a lot of tears will be shed when the day comes, but I’m confident in the knowledge that he has had the best start at the wonderful Elizabeth Foundation."

"Isaac has planted his roots here at The Elizabeth Foundation. I am positive that with the right care and nurture he will grow up to meet his full potential." 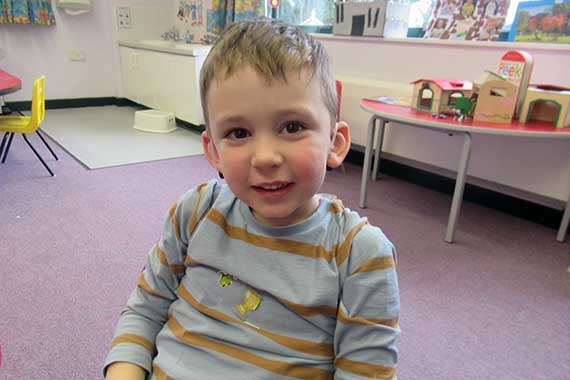