"Elliott was born three weeks early after a difficult pregnancy. Thankfully, he arrived safely and, aside from some initial issues with feeding and gaining weight, he was a happy and healthy baby. At five days old, Elliott failed his newborn hearing screening, and after subsequent tests, was found to have a mild to moderate bi-lateral sensorineural hearing loss. This came as a complete shock to us, with no history of hearing loss in either side of our family.

"After the diagnosis, we were introduced to Julie (CEO of The Elizabeth Foundation), who explained things in greater detail and offered the support and guidance of The Elizabeth Foundation from there on in. That week, Elliott and I started attending the baby group. It helped me enormously to chat to other parents, and I felt reassured that we were not alone and that Elliott could still thrive and achieve in life.

"At 12 weeks old, Elliott was fitted with hearing aids, and although the journey to Elliott keeping his aids in most of his waking day was long and arduous, he now wears them consistently, and not only helps in the care and maintenance of them, but he is also extremely proud of them. Elliott has moved from the baby group up through the toddler group and is now part of Adele’s preschool class which he enjoys immensely. Earlier in the year he started attending a mainstream nursery to prepare him for school and his confidence has come on in leaps and bounds, and he enjoys teaching his teachers and his friends about his hearing aids and how to sign!

"As Elliott has got older, more in-depth tests have shown that he has a mild loss on the low frequency and a moderate to severe loss on the high frequency. This means that he struggles particularly to hear the sounds he needs to hear to form speech. Thanks to the hard work of Charlotte, The Elizabeth Foundation’s Speech and Language Therapist, and an outside Speech and Language Therapist he was referred to, Elliott’s vocabulary and speech clarity is coming on amazingly and he particularly enjoys practising his letter sounds; he writes well and has even managed to read a couple of words at three and a half years old!

"He is a very cheeky, funny little boy who, although can be very shy to begin with, will chat for hours once comfortable. Elliott is now an extremely proud big brother to baby Henry, who is hearing, however on their first meeting, Elliott was very perturbed to find that Henry was not born with hearing aids!

"We are so thankful to The Foundation for all the help and support over the last few years; not just in an educational sense for Elliott, but in an emotional sense for us as parents, and we and Elliott have made lifelong friends in other Foundation families."

"It helped me enormously to chat to other parents, and I felt reassured that we were not alone and that Elliott could still thrive and achieve in life..." 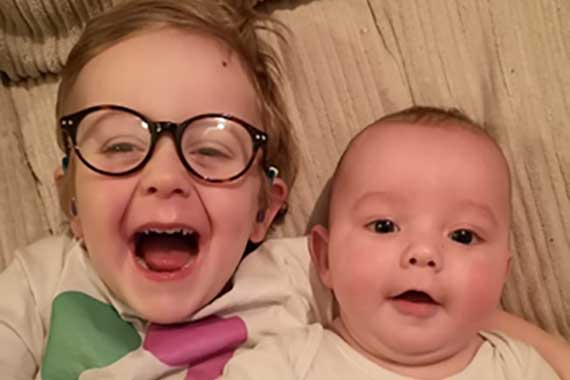