"Jessica was diagnosed with moderate bilateral sensorineural hearing loss at her newborn screening test. It was completely unexpected as we had no family history of deafness from birth and her birth was otherwise completely normal. She was fitted with hearing aids at three months and we were told by medical professionals that if she wore them consistently she would develop normal speech and there shouldn’t be any reason why she wouldn’t lead a normal life.

"We were initially encouraged by this; I went back to work and Jessica started nursery full-time. However, getting her to keep her hearing aids in was a constant battle. She would pull them out at every opportunity and was even spotted hiding them in the nursery sandpit!

"By the time Jessica turned two, we were noticing that her speech was not developing at the rate of her peers and was clearly behind that of her older sister at the same age. We asked about getting a speech and language assessment but were told it was “too early”; “siblings develop at different rates so don’t expect Jessica to be in line with her sister”; “there is a very wide benchmark at this age – she is within that benchmark albeit at the lower end” .

"We became very frustrated. Surely there is more we could be doing for her? Why do we have to wait for her to fall noticeably behind before any support service becomes available to her? Shouldn’t we be trying to stay on the front foot?

"It was then, while we were searching the Internet for help, that I came across The Elizabeth Foundation’s website. The education services they provide would be brilliant for Jessica but we had some reservations.  Was it too far to travel? Could we make the weekly trips down to Portsmouth and fit it in around work and the school run for Jessica’s older sister? Is Jessica even deaf enough to warrant their support? I thought I’d give Julie, the CEO a call anyway and she suggested we come down to the family centre and take a look around.

"Straight away we knew we had to make it work. The Centre was so welcoming, there was so much expertise, everything was geared up to provide the best support for deaf children. We also noticed that there were children with similar levels of deafness to Jessica at the centre, and other profoundly deaf children that had such better language skills than Jessica.

"Jessica joined the toddler group a few weeks later in the summer term, and then moved onto Rachel's preschool class the following September. By Christmas it was very clear that Jessica’s language skills had shifted up several gears in that time. She was still shy to talk in front of adults outside of our family, but at home we were almost having a back-and-forth exchange which was a huge step forward.

"The Elizabeth Foundation has been such a huge help to us over the last two years. Jessica has made such great progress; she is still behind her hearing peers, but has enough language now that she can ‘keep up’ with her friends. She loves going to preschool class. She will lay out her ‘uniform’ the night before her class and we hear her using the vocabulary that has been covered in the session over the rest of the week. She even role-plays the ‘morning circle time’ with her dolls and teddies! She is also proud to tell other family members that the children in her “Portsmouth Nursery” wear hearing aids “just like me!” Since she started attending The Elizabeth Foundation we have had no issues with her keeping her hearing aids in. She is happy to wear them and will often ask for them to be put in in the morning.

"What I hadn’t appreciated was how much support The Elizabeth Foundation would be for us as well. It has been great to meet other parents, share stories and advice. We have also attended the Parent Education sessions which have provided us with information on what to look for when choosing schools, navigating the Education and Heathcare Plan (EHCP) process, and lots of general tips to support our deaf children at home.

"Jessica will be starting her mainstream school next term and while we are so sad that her time at The Elizabeth Foundation is coming to an end; we are approaching the next phase in her life with much more confidence and hope. She is still playing ‘catch-up’ with her language skills but we feel we now know what support she needs, and can work on this at home, continuing the good work started by The Elizabeth Foundation. We also feel confident enough to ask our local support service and Jessica’s new school to follow the same approach.

"Looking back, we only wished we had come across The Elizabeth Foundation earlier in Jessica’s life given how crucial those early years are to language development. However, we are so grateful for the time that we have had and we can’t thank the staff enough for what they have done for our family."

"We are so sad that her time at The Elizabeth Foundation is coming to an end; we are approaching the next phase in her life with much more confidence and hope..." 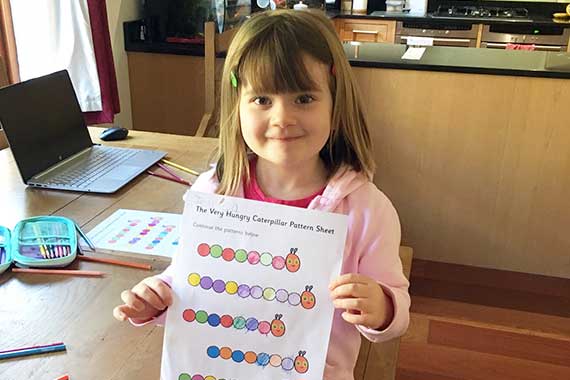