"Initially, Oscar did not pass his newborn hearing screening on the first three attempts and only got the all clear following a bone conduction test. As soon as we were home from hospital it became obvious that he wasn’t responding to everyday noises – the dog barking, a plate being dropped, etc – so we were referred to community audiology. They diagnosed Oscar with a moderate conductive loss, which they then monitored every three months and there was very little measurable change at each visit.

"However, by the time Oscar got to 12 months we had become really concerned. He made no babbling or attempt at speech, he didn’t sleep as he was scared of the dark with no sound and being unable to see, he cried frequently and became increasingly frustrated. In desperate need of support, I remembered hearing about The Elizabeth Foundation on the radio before Oscar was born as it was one of their station’s selected charities.

"We looked them up and their website was fantastic – finally we had found information we could relate to. I sent Julie a message and asked if Oscar might be the kind of child they could help. Julie rang me straight back and spoke to me for a long time. She gave me lots of suggestions of things that might help us and also invited us to their monthly ‘Listen’ support group. It was fantastic, a group of parents all in similar positions with similar struggles and concerns. Oscar loved the sessions and Julie gave us loads of activities we could try at home to encourage his speech and language development.

"Oscar was referred to our local hospital audiology team, and at our first appointment they offered hearing aids which they fitted a few weeks later – this in our eyes was the turning point we needed. Oscar also started attending the Foundation’s toddler group with Nicki. His speech blossomed over the next 12 months with Nicki’s support and as he was able to express himself his frustrations settled. He became so confident and chatty, and he moved up to Rachel’s preschool class at Easter this year.

"I know it’s a bit of a cliché when people use the term “life changing” but The Elizabeth Foundation is exactly that. We found them at our lowest, they supported both Oscar and our family and gave us the tools to really help him. The work they do is simply amazing – they are so committed to supporting each child. I haven’t even mentioned teaching assistant Lily – who has been with Oscar through toddlers and now into preschool – and all the other fantastic and dedicated staff, each and every one of them is amazing. Now Oscar is flying, he never stops talking, he’s confident and hilarious to be around!"

"I know it’s a bit of a cliché when people use the term “life changing” but The Elizabeth Foundation is exactly that...." 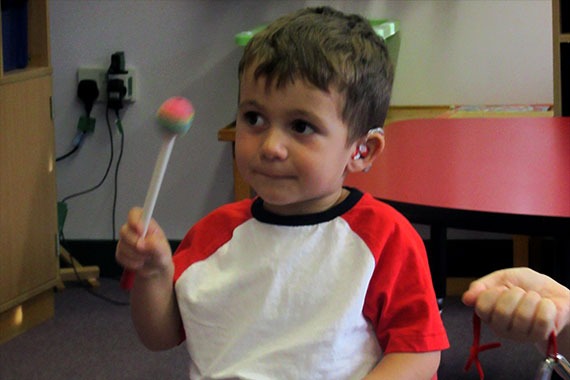