"I was two when I was diagnosed with Widened Vestibular Aqueduct Syndrome and Mondini’s Syndrome. It took two years and two months to get diagnosed and I was falling behind. I was not talking and I was not responding to many sounds. With very determined parents, I eventually had a hearing test and an eye test. My eyes were perfect, but my hearing loss was confirmed.

"I was fitted with hearing aids and I gradually learned to respond to the sounds around me. My grandma told me that she took me to the Witterings beach and I sat there by the shoreline, my feet in the water, just listening to the sound of the waves crashing onto the shore. It was the first time I had ever heard the high pitch frequency of the waves.

"I went to The Elizabeth Foundation, and it was there that I learned how to speak and how to communicate. My whole family were involved in the programme and without them, I would not be the person I am today. I have gone from not knowing whether I would ever speak or hear to applying to Royal Holloway, University of London to read Law. Much of my success is down to my early years and the support I had right from the start, from my family and from the Foundation.

"At the age of 8, I lost the remaining hearing I had in my right ear and I got a cochlear implant in that ear. Once I adjusted to my new technology, I went from strength to strength. In year 5, I was top of my set in English. Time moved on and I progressed to secondary school at The Petersfield School. In Year 9, at the age of 14, I decided that I wanted a second cochlear implant. Within a few days, I was hearing words and sentences through my new technology.

"During Year 10, I undertook my Duke of Edinburgh Bronze Award. At the end of that year I applied for Head Boy and I was awarded the role of Deputy Head Boy. The role I had was such a positive one because it helped me realise that I could do anything.

"I moved to Sixth Form College to study Law, History and Creative Writing. I was successful in getting the A Level grades I needed to get into Royal Holloway, University of London to study Law, and I have just started my second year. Being deaf inspires me to work – I have this constant determination to prove myself. Watch this space…!"

Alex has graduated from Royal Holloway, University of London with a First Class Honours degree in Law. He is now a Paralegal for a year and starting a masters degree in September.

Alex says, "As you can probably appreciate, this is a monumental achievement and would not have been possible without the support of The Elizabeth Foundation when I was a child."

"I went to The Elizabeth Foundation, and it was there that I learned how to speak and how to communicate...." 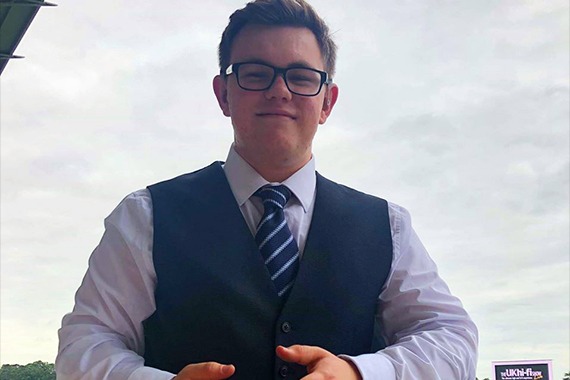