"After Jenson was born, in the first five weeks we had two newborn hearing tests at home and then a test at home with an audiologist, but everyone just kept telling us not to worry, it’s probably just fluid from the birth. Then, following what felt like the longest hospital appointment we’ve ever had, we were given the diagnosis that Jenson had severe to profound bilateral hearing loss. It felt like the earth fell from beneath us. And like that, a whirlwind of emotions and appointments began.

"Jenson received his cochlear implants by the age of one, and took to them immediately. By two years, he started speaking and his listening developed quickly. What we didn’t account for was his temper, tantrums, frustration, and tears.

"We relocated to Portsmouth from Cornwall in February 2021. We had been told about The Elizabeth Foundation by a few people but hadn’t really looked into it, as I think everything was a little overwhelming post move. But, thankfully, people didn’t stop pushing us to visit, and thank God we did!

"It’s been life changing for both Jenson and myself! It is a phenomenal facility for our little people and the team are incredible. Each one of them is so supportive, to both the children and us as parents. They are always there for us, whether that’s an email or a chat on pick up and drop offs.

"Then, the truly amazing part, because Jenson is so lucky to have the most fantastic teaching team, his behaviour has improved dramatically. He’s never been naughty although certainly got angry sometimes; however, since starting at The Elizabeth Foundation, not only has he calmed down, but he has also learned how and when to express his emotions. They are what I wish I had as teachers, so patient, knowledgeable and really understand the children.

"Jenson attends twice a week, and truly loves being there. The things he has been able to experience since attending are more than I could have wished for.

"I wish Jenson never had to leave The Elizabeth Foundation, but I can say from the heart I have no worries about him starting infants next year after the amazing work they have done with him. I honestly wish every deaf child had the chance to go somewhere like this."

"I honestly wish every deaf child had the chance to go somewhere like this." 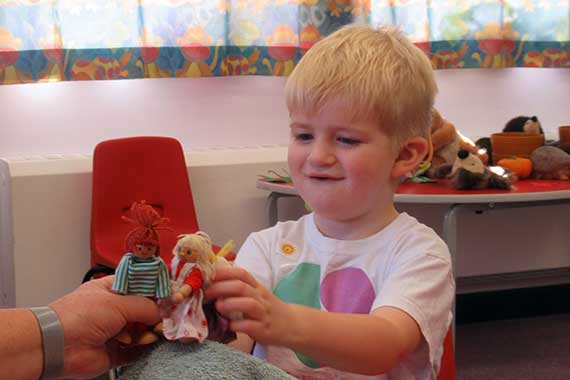