"At five weeks, Sam was diagnosed as being profoundly deaf. We were devastated. Why him? Why us? No one in our family was deaf and we had no experience of knowingly meeting anyone else who was deaf.

"Hearing aids would prove of no practical use as there was next to no hearing to amplify. We thought that he would never be able to speak to us... Nor, more importantly, would he ever be able to hear us tell him we love him.

"We worried about him making friends. How would he be able to go to mainstream school? And how would we cope with this additional challenge as two new, first time, parents?

"Fast forward almost a year and, it would transpire that, Sam was lucky. It sounds almost perverse to say out loud but he was lucky that his level of deafness was as severe as it was. He proved to be a suitable candidate for cochlear implants and was implanted just before his first birthday.

"What a birthday present!!!

"Unbeknownst to us, it would prove to be a long journey for Sam to talk. Two years post implant Sam was listening well and his understanding was very good but he still wasn't using any discernible words. The professionals, who supported Sam, said they would have expected more progress at this stage.

"It was emotionally very difficult to see other children of his age, both hearing and hearing-impaired, chatting away. We felt alone.

"We were told about The Elizabeth Foundation, by our teacher of deaf, at Sam's implant centre. We immediately signed up for the home learning course as we felt the 70 mile drive there would have made attending on a regular basis, prohibitive.

"The home learning course was fantastic (now available online). It gave us lots of ideas and games targeted for Sam's current hearing and listening abilities. We would receive feedback and the next lesson when Sam was ready to progress further.

"After a routine appointment at the implant centre, we spontaneously decided to drop in to The Elizabeth Foundation, en route home.

"We knew immediately that Sam had to attend in person. We received an exceptionally warm and enthusiastic greeting from the team and we could immediately feel the support and sense of optimism, that had been, thus far, absent.

"We felt so lucky that the 140 mile round trip was "doable" in a day. Sam attended once a week for the next two years. It was the best decision we ever made.

"Each term consisted of different topics. We were given vocabulary to learn and ideas at home to extend and build upon the language contained within the topics. Further enhancing relevant language opportunities (not to mention fun opportunities!), Sam went on some great trips: Marwell Zoo, 'mini beast' exploration, making pizza at Jamie's Italian. There were actual visits from the Fire Brigade and Police, to boot!

"All of this in addition to a fantastic acoustic environment, exemplary small class sizes of approximately eight; and then there is the one to one speech therapy with the specially trained speech and language therapist. I am not aware of many (if any) mainstream preschools able to provide such tailored expertise.

"In addition to the, expert, oral approach to communication that we wanted, we came to realise that we would get -- arguably just as crucially -- a huge amount of emotional and procedural support during challenging times. Applying for school and an Educational Health and Care Plan to name but two occasions when we would have been utterly lost without the team's respectful encouragement, support, and wise council.

"It has indeed been a long journey for Sam as he also has problems with his balance to contend with.

"Sam is currently scored at having the lower end of age appropriate speech. This is a fantastic achievement for our, not-so-little, boy. And all before he has even started at his new primary school. A mainstream, school we might add!!

"We feel so optimistic about Sam's bright future and we don't feel his deafness will hold him back from achieving anything he wants to in life.

"Elizabeth has literally laid the foundation so that Sam could fly. The Elizabeth Foundation has been a truly special experience that we, and Sam especially, will never forget. My only regret is that we didn't come sooner.

"It would have been such a comfort to have known about the Elizabeth Foundation upon Sam's diagnosis. A comfort that, if we get our way, many families will come to know over many, many, years to come."

"The Elizabeth Foundation has been a truly special experience that we, and Sam especially, will never forget…" 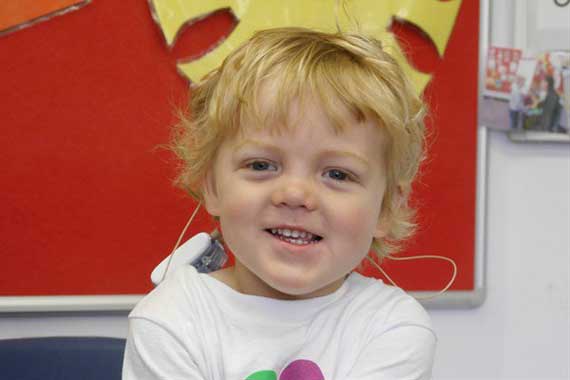