"Our first child, Ted was born in November 2014 and we were very happily enjoying being in our new baby “bubble” with our beautiful boy. At 10 days old Ted failed the new-born hearing screen. I had had a strange inkling that he wasn’t responding to sound but was stunned nonetheless. Our Health Visitor was quick to reassure us that this was probably due to fluid in the ears and it wasn’t uncommon for children to fail the first test. The test was repeated at home a week later and again failed and then repeated and failed a third time at hospital until we were referred to audiology. Hearing tests were carried out on our tiny baby boy, whilst he slept. We held onto the hope that there was fluid in his ears until the audiologist confirmed “at the decibel levels we have tested… this is not fluid”. Ted wouldn’t have heard an aeroplane taking off behind him. We then found out that our baby has a permanent, profound, sensorineural hearing loss.

"At this point, being from a hearing family, we thought the road ahead would be us struggling to communicate with Ted, not being able to engage with him and frantically trying to learn sign language and find deaf communities. We had never heard of cochlear implants but were advised that Ted should go through the assessment process as they could give him access to sound. Ted’s hearing loss was so profound, hearing aids did not give him access to speech. My nights were then spent frantically searching the internet for deaf related articles, information on cochlear implants and local support. Through another charity we were put in touch with two families in our local area who have children with cochlear implants. We arranged to meet up to further our understanding of what the implant process involved and to decide if this was what we wanted for Ted.

"It was at one of these meetings that another mother spoke to us so emphatically about The Elizabeth Foundation and strongly recommended it as a place that could support Ted. I again took to the Internet to learn more about The Elizabeth Foundation and what it had to offer. I thought that the home learning programme looked interesting but had been advised to “talk to Julie” (Julie Hughes, current CEO of the charity). I called TEF and spoke to Julie on the phone.  She listened to our story and was instantly empathetic, passionate and supportive. She kindly invited us to visit so we could see the place for ourselves and have a chat with her in person. Being based in Portsmouth it was a 50 minute drive for us so my husband Adam, Ted and I went for a visit.

"Julie gave us a tour and we had a chat. We heard all about the groups on offer to the children: Baby group, Toddler group then Preschool. We learned:

"Julie said she knew three other boys who were already attending the baby group that Ted would fit in with perfectly so we instantly made the decision that Ted would start attending Baby group in September 2015 when he would be 9 months old.

"Adam and I began taking Ted to Baby group each week which focussed on developing their awareness of sounds including moving to music, feeling vibrations and tempos, singing, recognising cause and effect and encouraging attention. As parents we learnt to ensure we are responding to all vocalisations the babies made. Julie, aided by Pat, Teacher of the Deaf, were able to answer any questions or concerns and were genuinely interested in all of the children and their progress, they ensured they were aware of any upcoming medical and audiology appointments and gave advice and support and understanding to all the families. As parents it felt so lovely to have some structure and to know that we were doing something so proactive to support Ted develop his communication skills at this early stage.

"Ted’s implant operation went smoothly and he was “switched on” when he was 16 months old. We then had the challenge of supporting a very busy toddler to keep his processors and headpieces in place so he could learn to process all the new sounds he was beginning to hear. The support from The Elizabeth Foundation was never more valuable.

"When Ted was 19 months old his sister Rosie was born. By this time we knew that the cause of Ted’s deafness was due to Adam and I both carrying a recessive gene (Connexin 26) and that each child we had would have a 1-in-4 chance of also being deaf. When Rosie was born the newborn hearing screen was completed before she left hospital at just 1 day old, which she failed. Despite knowing this was a possibility it was again a huge shock. But with Ted flourishing in Baby group and then moving up to Toddlers, Rosie began to come along too.

"Ted had been in Baby group with Julie for a year and in all honesty I wasn’t really ready for him to leave and transition up to Toddlers in September 2016. However, meeting Toddler group leader Nicki put any worries aside. Another amazing member of staff who worked tirelessly with our very busy group to engage the mischievous boys and girls and help them to extend their understanding and vocabulary. Through a range of fun activities, the children learned to recognise and locate sounds, discriminate between different types of noise and develop their expressive language and speaking.  Snack time was a firm favourite way to keep the toddler’s attention and expand their understanding of verbs!

"The year in Toddlers passed far too quickly and soon Ted was again moving up to Preschool in September 2017. This time I was ready for the move and knew another fabulous group leader was waiting for him – enter Rachel. Ted stayed with Rachel for two years alongside his three friends who he had met on day one. Rachel had the challenge of getting the group ready for school. Their language and speech was developing at a rate of knots and I think Rachel was certainly kept on her toes! The topics covered within all the sessions and the amazingly creative activities, backed up by vocabulary sheets and activities that are sent home to the families, caused Ted’s language to flourish and to this day he never stops talking. But as well as developing his speech and language he has learned to pay attention in a group situation, take turns in talking, listen to peers and teachers and he was certainly ready for school when he graduated from The Elizabeth Foundation in a very emotional ceremony in July 2019.

"Meanwhile Rosie began to attend Baby group with Julie in September 2017 and progressed through to Toddlers with Nicki in February 2018. We had learned that Rosie’s hearing loss was not as profound as Ted’s and she is able to hear with her hearing aids, although her level of hearing loss can fluctuate with middle ear congestion. We often made the trips down to Portsmouth a family affair. Adam and I both loved supporting our children within their sessions and learning communication strategies. Ted and Rosie’s Grandparents were also welcomed to attend so they could see what the children were doing and see other children with the same technology and learn how to support their hearing and listening.

"Whilst Ted has always been a very chatty and communicative boy, Rosie is a lot more of a shy and reserved child. We used to sit alongside her in Baby and Toddler group and she wouldn't say a word but I’d know she’d taken it all in as she would sing all the songs in the car on the way home. I used to try to film her singing and chatting at home so the staff could see what she was learning, despite her not always having the confidence to speak in front of the group. Rosie moved into Adele’s Preschool group in January 2019 and she continued to be fairly shy, however the kind and nurturing support she was given truly worked wonders for her and she was beyond thrilled to be chosen to be Mary in the Christmas Nativity as the staff had such faith in her. We were so proud and couldn’t believe it when she was brave enough to sing her song solo in front of the parents in the audience, this was a huge achievement for Rosie.

"And here we are, July 2020. Ted has just finished his first year in mainstream school, his academic work and his speech and language is all age appropriate. He continues to receive support from a teacher of the deaf, speech and language therapist and a 1:1 teaching assistant who have all continued to work on the foundations which were put in place by all the staff at The Elizabeth Foundation. He continues to be a very busy and chatty boy.

"Rosie has just finished in Preschool with Adele which she has enjoyed immensely, but with thanks to all the support she has received she feels ready to start our local mainstream school with her brother in September. Over the Summer we already have plans to meet up with some of the friends Ted made from Baby group and the parents continue to be a huge support.

We had a third baby, Jemima in April 2018. Jemima is hearing and so has only taken part in sessions as an onlooker. However, the three of them can still be found playing “circle time” on our kitchen floor using the pictures that were used within their groups and singing “Up, up, up, up… up on the board”, with Rosie loving playing the role of ‘teacher’.

"We are so grateful for the start Ted and Rosie have been given with their listening, hearing and speaking and will be forever thankful to the mummy who told us about The Elizabeth Foundation. The Elizabeth Foundation has been a huge part of our lives for the last 5 years and I can’t recommend it highly enough as a place to support deaf children and their families. We will miss it tremendously."

Ted and Rosie's mother and father

"We are so grateful for the start Ted and Rosie have been given with their listening, hearing and speaking and will be forever thankful to the mummy who told us about The Elizabeth Foundation..." 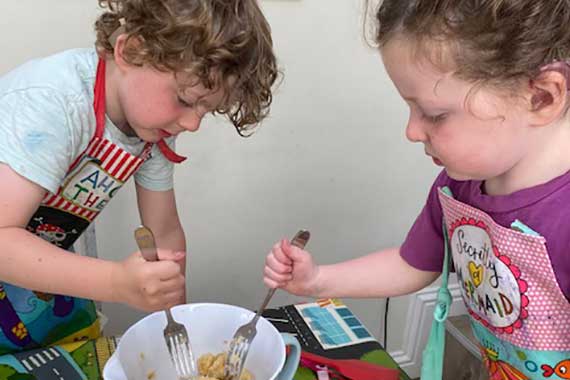