"Our beautiful baby boy Thomas was born on 7 September 2014, a brother to James who was aged 2 at the time of his birth. He didn't pass the newborn hearing screen and within 3 weeks we were referred to The Elizabeth Foundation. He was fitted with hearing aids at the age of 6 weeks. At the time of his diagnosis we could not believe it was happening as we had not experienced any babies or children with a hearing loss and never seen a baby wearing a hearing aid.

"We were very apprehensive and frightened on our first visit to The Elizabeth Foundation but after speaking with Julie we knew everything would be OK. When we arrived, we could not believe how happy everyone seemed to be and how friendly everyone was. The staff could see how upset we were but we soon realised that we were not on our own. The following week when we came for the next session, we were looking forward to being with other families experiencing the same or similar issues.

"Thomas was also born with other problems, including Microcephaly, which is possibly linked to his hearing loss. He was also diagnosed with sensory moderation disorder but the staff, teachers and facilities at The Elizabeth Foundation are well equipped to deal with these problems. Thomas received speech and language therapy as well as play therapy from day one, and we cannot praise the staff enough for all they have done for Thomas and the whole family. At Christmas and throughout the year, all the children are welcomed at the Foundation and it really has become an amazing part of our lives.

"Thomas has grown into a very chatty and friendly little boy. He is very confident and aware of everything going on around him. As an example, we recently witnessed an accident and he was able to tell the police exactly what happened. They were amazed with his ability to recount so much detail. Thomas likes role play and wants to be a doctor when he grows up – possibly due to his grandmother who works as a health care support worker and the amount of times he has seen medical staff. He enjoys singing, dancing (including ballet) and loves playing with other children, which is reciprocated.

"We have learned to sign and found this very useful in communicating with our the boys. Thomas signed “dadda” at around 12-13 months before he was fitted with his cochlear implant and now has good clear speech, talking like a hearing child of his age.

"Thomas will be leaving The Elizabeth Foundation this summer and we are apprehensive about him starting a new school. We have been fortunate to find a resource base attached to a local mainstream school in Salisbury where he will continue to receive speech and language therapy and also has a Teacher of the Deaf. We feel strongly that he should be pushed to achieve as much as possible in school as we have in the first 5 years of his life, and that he should be given the same opportunities as other children who do not have a hearing loss.

"We shall miss bringing him here but know that he has had the best possible start in life, thanks to the input from The Elizabeth Foundation. We hope to be able to bring his younger brother, Daniel, next term as we know he could benefit considerably from the excellent care and resources here and we would definitely recommend the Foundation to anyone who has a child with hearing loss.” 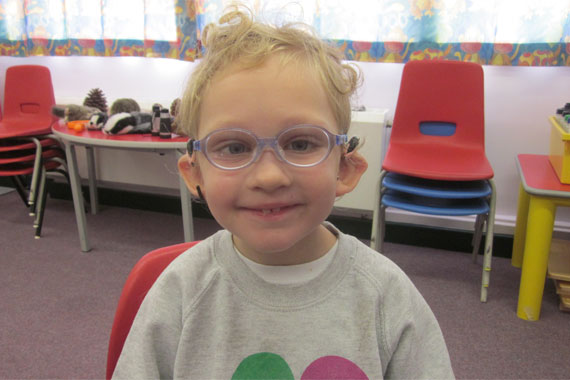 "We shall miss bringing him here but know that he has had the best possible start in life, thanks to the input from The Elizabeth Foundation..."